The chronicles of Ethiopian American life, outlooks and experiences. 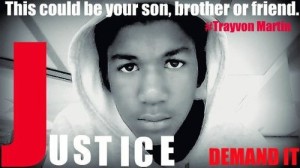 I often write about issues specifically relating to the Ethiopian American Community.  Today I’m diverting to that, to something that affects EVERYONE.

When I started Law School, some people asked me if I will practice International Law.  Being the daughter of immigrants its automatically expected that I will try to practice international law, immigration law, or something of the sort.  My answer to that question is no.  Why you may ask: because I see so many domestic issues, that I see first hand, that will affect my future children; that directly affect my family and friends here in the United States of America.

My parents left a country in which the government was notorious for unjustly killing young people.  They moved to a country that unjust killing still persists.  Although it is not the government committing such crimes, it is still prevalent, private citizens taking the law in their own hands.

Can you imagine living in a country where your son, brother, cousin, boyfriend, husband, may get gunned down simply because they were walking while black.  That’s what happened to Trayvon Martin.  I am writing this today because in my heart I have been moved.  Trayvon Martin is not Ethiopian, and I wonder if Ethiopian parents realize how much this situation affects their sons; anyone could be next.  This is the world you live in today.  I beg of you all to make yourselves aware of the domestic issues, because they are what actually affect US, your children, being born and raised here in the U.S.  I grew up listening to my family debate the issues existing in Ethiopia.  I understand their deep concerns with the state of the Ethiopian Nation.  BUT, I urge you to please make yourself aware of the issues that exist HERE, Where YOUR Children are growing up.  The issues that deeply affect US.

I don’t have any brothers, BUT I DO have so many male cousins, and as I think about what happened to Trayvon Martin, I can only think of what could have happened to one of them.

I usually do not post my poetry online, this situation has made me decide to make an exception:

I find myself mourning the death of someone I never even met.

Not a pop icon, or someone whose music I grew up listening to

But someone I’ve never even heard of

Someone I’ll never get to meet

Someone none of us will ever get to see

Just a distant memory, that I never had the chance to make

I find my eyes filling with tears

When I think about how after all these years…

It must have been cold outside that day

So he put his brown hands in his pockets instead

Didn’t know exactly which direction to head to

So he probably looked lost

His favorite candy was probably skittles

That day he had a bag in his hand

Or the next football star

His life is gone

Never to be returned

As he, screamed out for help

Right before the man pulled the trigger…

We’ll never know what his last thoughts were,

I can only imagine how scared he was

As the lead penetrated his sweatshirt

As the blood flowed from his

to his t shirt

as his life came to an end

We’ll never know his thoughts within

He’ll never get a chance again

As his killer walks away with no regrets

Could have been any one of us

Caramel, dark, or honey whichever type it is

In his eyes it was still suspicious looking black male.

As you stand there with your jaw locked

And your hands in your pocket

And your hood over your head

Face and heart hardened by all the struggles you have faced

Hood pulled so low I can’t see your eyes

I don’t know your intentions

Quietly standing alone, talking to no one

Not expressing yourself or your thoughts

you’d rather not speak unless spoken to

Because they may mistake your words for some type of attitude

As you make your way to class

Carrying a book bag with books in it

They think you got crack rocks and bullets in it

Standing over 5’10 with your suspicious looking skin

And your suspicious eyes

And your suspicious grin

Even if your bag is filled with books

Potential that no one would see

Because within seconds your life will end

Because your suspicious skin frightens him

Your suspicious skin brings about reason for probable cause

And your suspiciousness is always beyond a reasonable doubt

And you are surely guilty of all the crimes

He thinks you’re ABOUT to commit

At the young age of 17, suspicious looking black male

You are a threat to him

And your dreams will be in vein

And your ambition and vigor to be the best you can

You have suspicious looking brown skin,

2 thoughts on “Who’s Next? The fight for Justice.”